7 Chest Exercises with Resistance Bands For an Explosive Workout

Published on December 6, 2021
by Jenny Churchill 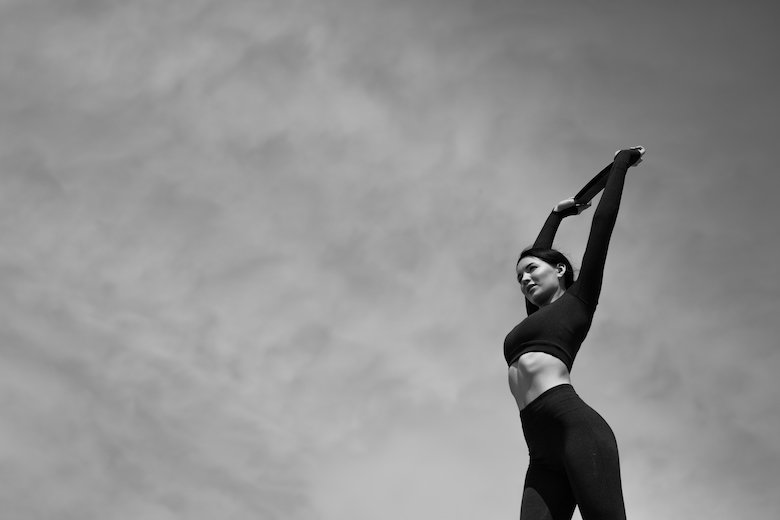 The chest is an area of the body that is rarely neglected when it comes to exercise. However, this does not mean it is an easy area to work on and develop properly. It’s easy to feel like your routine has hit a wall with little progress.

Sometimes all you need is a change of direction. Maybe the addition of something simple like resistance bands.

So let’s take a look at some chest exercises with resistance bands that you can incorporate into your routine.

Resistance bands can be used to assist with exercises, add extra resistance to movements, or as a substitute for exercise equipment such as dumbbells or cables.

As a resistance band is stretched, the material will resist, creating varying degrees of tension depending on how far the band is pulled.

This means you will receive the most assistance from a resistance band at the most difficult point of a band-assisted exercise.

For exercises using the resistance band as an additional load, the band will gradually increase in tension from the beginning to the end of the movement.

This is ideal for explosive training.

As well as being versatile, resistance bands are extremely portable. They can be taken with you anywhere.

That’s the benefits of resistance bands in a nutshell.

Here are some chest exercises with resistance bands that you can perform almost anywhere.

Resistance band-assisted push-ups are great for beginners who cannot perform a push-up with good form without assistance.

They are a much better alternative to push-ups performed with knees on the ground, as they more closely emulate an actual freeform push-up.

This exercise is ideal for use in conjunction with eccentric-focused push-ups (body is lowered as slowly as possible from the top of a push-up) as a way to strengthen the body for unassisted push-ups.

The resistance band will need to be set up so that it hangs about 2 feet from the ground.

You will then place your legs through the opening of the resistance band until the band is at hip level.

With the assistance of the band, you should be able to perform push-ups with perfect form.

Aim for three sets of 5-7 repetitions. Once you can perform this volume with good form, you can progressively use weaker resistance bands until you can perform push-ups without any assistance.

Once you can perform push-ups, dips are the logical next step for bodyweight chest exercises.

While there are machines made for assisted dips, utilizing bands will provide the least amount of assistance necessary for performing dips with good form.

The use of bands also ensures that your core is still engaged, as it will be in an unassisted dip.

For band-assisted dips, you will place the resistance band around both bars or handles that you will be using.

Start with a resistance band that will allow you to perform three sets of 5-7 repetitions and progressively decrease the strength of the resistance band until dips can be performed with good form and no assistance.

Resistance band flys are a great alternative to cable flys. Cable machines or functional trainers are large and expensive, which means you either need to go to the gym or fork out for a home.

We love ’em though – they are very versatile. Check out our favorite functional trainers here.

While cables provide a more consistent amount of resistance throughout the fly exercise, resistance bands will peak in resistance at the end of the movement.

This is the key point of the exercise.

Flys also require less resistance than many chest exercises to be effective, so resistance bands’ flys will provide a great challenge.

For standing band flys, you will want two bands of the same resistance, or you can obtain a resistance band that is manufactured for flys.

Each one needs to be anchored securely at the same height (height will depend on how you want to perform them).

Suspension trainers have a single anchor point and make the fly a breeze. We have covered the two options if you want to know about the benefits and differences between suspension rainers and resistance bands here.

Once the band or bands are set up, you will grab a band in each hand, step forward with one foot, and start.

It is very important that the bands are secure, as they will snap forward and potentially cause injury otherwise.

Resistance can be increased by stepping further forward or using a stronger resistance band.

Resistance band flys can also be performed in a lying position on a bench. The idea is the same, but setting up this variation might be easier.

Because your body is lying against a bench, it is also easier to perform the exercise without worrying about losing form.

For lying resistance band flys, each band needs to be anchored securely on the ground on either side of the bench. If you have suspension trainers, there will be a single anchor point.

The bands should be set up so that there is still resistance when your arms are outstretched at the beginning of the fly movement. Again, make sure the bands are secure to ensure safety.

Need a bench? Check out our favorite weight benches here.

Resistance band presses can be performed in a standing or lying position.

While resistance band presses will not provide as much stimulus for muscle hypertrophy (growth) as other pressing exercises like the bench press or push-up, they are good for explosiveness.

As you press forward with the resistance band, the tension will progressively increase, requiring the muscles to accelerate movement as the exercise progresses.

This is a great movement for those who need to increase explosive strength for sports.

For resistance band presses, you will take a single resistance band and hold both ends with both hands. The band will then be placed behind the back, right below the shoulder blades.

The press should be performed with controlled, explosive movements during the concentric (pressing) phase and a slower eccentric (release) phase for ideal results.

These can be performed standing or lying, but standing will allow for an extended range of motion.

Resistance bands can also be used to add a variable to exercises you may already be doing.

For more experienced athletes, it may be difficult to progress with standard push-ups. Incorporating resistance bands is an easy way to break a plateau in progress and is conducive for explosive strength.

The setup is very similar to resistance band presses. Simply grab both ends of the resistance band with both hands, place the band behind you below the shoulder blades, and perform push-ups.

Your core should be engaged throughout the movement, and proper form and technique should be utilized.

For the sake of periodization in fitness, which simply refers to different phases of your workout routine over a long period of time, it is important to incorporate different variations of certain exercises.

Adding resistance from bands to your bench press is a simple and effective way of doing this. Training with resistance bands will aid in explosive strength training and overall progress.

You will want two resistance bands of the same strength, which you will anchor at two points on either side of the bench.

The bands should be set up so that there is tension throughout the bench press movement. If you are performing this exercise with added weights, as well, the bands will be secured on the outside of the bar next to the plates.

While there are many ways to execute the movement, the concentric phase should be explosive but controlled, while the eccentric phase is slower.

The resistance band is a versatile and effective tool for varying exercise stimuli.

It can aid in performing exercises, act as a substitute for certain types of workout equipment, and enhance explosive strength training.

Of course, safety is vital, so make sure the bands you are using are of 100% integrity, not damaged or worn in any way, and fully secured when anchored.

Want to firm up the butt? Check out our article on resistance bands for the glutes here.

Always being a fitness fanatic saw Jenny become a Level 2 Certified Personal Trainer. She was able to maintain her enthusiasm for her own fitness after the arrival of 2 more mouths to feed. And now it's more about helping others through her writing, something she can do from home.

This site uses Akismet to reduce spam. Learn how your comment data is processed.

As an Amazon Associate, we may earn from qualifying purchases with no effect on the price.

We pride ourselves on providing as honest and reliable information as possible without any prejudice or bias.